The installation of the ‘SiFT’ lithium carbonate plant is completed, with all major connections made to the existing plant, and the installation of a new weatherproof enclosure (see Figure 1 below). ‘Wet’ commissioning of the SiFT Plant is ongoing, and it is expected that fully integrated operations will commence during September. Standard Lithium has also installed and commissioned a novel osmotically assisted High Pressure Reverse Osmosis (HPRO) unit at the demonstration plant in El Dorado (see Figure 2 below). This unit sits between LiSTR and SiFT and is used to concentrate the lithium chloride product continuously produced by the existing LiSTR Direct Lithium Extraction (“DLE”) plant, so that it can then be converted to lithium carbonate. The HPRO unit is now operational and is being integrated into the overall process flow at the plant.

Figure 1: Inside the weatherproof structure that houses the SiFT lithium carbonate crystallization plant. SiFT is fully installed and integrated with the existing operational DLE plant at Standard Lithium’s Demonstration Plant in El Dorado, Arkansas, USA. A photo is available at https://www.globenewswire.com/NewsRoom/AttachmentNg/98faac2b-ef0f-478e-a003-ef59bcc741bf.

Figure 2: The osmotically-assisted High Pressure Reverse Osmosis (HPRO) plant installed on the third storey of the Company’s LiSTR DLE Plant. This unit acts as the link between the LiSTR DLE plant and the SiFT plant, and serves to concentrate the lithium chloride product so that it can be converted to lithium carbonate. A photo is available at https://www.globenewswire.com/NewsRoom/AttachmentNg/b7e253f7-e4a9-4911-b8ae-fefc9c93a6e6.

Standard Lithium also issues an update on the company’s status following Hurricane Ida. In advance of the storm, Standard Lithium’s team in Arkansas engaged pre-emptive emergency safety protocols to secure the plant, critical infrastructure and team at the El Dorado site. Standard Lithium personnel ensured all equipment was moved to a safe, staging area to protected against possible storm damage. Ultimately, with a shift in Hurricane Ida’s path, operations continued without interruption.

Dr. Andy Robinson, President and COO of Standard Lithium commented “we’re very thankful that our team and operations are safe and that El Dorado was spared the worst of Hurricane Ida. Our project execution efforts continue and with the final stages of commissioning and integration almost finished, we are now in the final stages of running the only continuous, 24/7 start-to-finish brine-to-carbonate plant in North America.”

Standard Lithium has also announced its latest corporate citizenship efforts to support the El Dorado community. In September, Standard Lithium, alongside LANXESS and others, will be a major sponsor for the “22nd Annual SouthArk Outdoor Expo!” being hosted by the South Arkansas Community College Foundation on Saturday, September 11, 2021. In October, Standard Lithium will be a ‘Superstar Sponsor’ for the “Main Street El Dorado Musicfest 2021” which will feature performances by the likes of Frank Foster and Ice Cube.

Standard Lithium is an innovative technology and lithium development company. The company's flagship project is located in southern Arkansas, where it is engaged in the testing and proving of the commercial viability of lithium extraction from over 150,000 acres of permitted brine operations. The company has commissioned its first-of-a-kind industrial-scale direct lithium extraction demonstration plant at Lanxess's south plant facility in southern Arkansas. The demonstration plant utilizes the company's proprietary LiSTR technology to selectively extract lithium from Lanxess's tail brine. The demonstration plant is being used for proof-of-concept and commercial feasibility studies. The scalable, environmentally friendly process eliminates the use of evaporation ponds, reduces processing time from months to hours and greatly increases the effective recovery of lithium. The company is also pursuing the resource development of over 30,000 acres of separate brine leases located in southwestern Arkansas and approximately 45,000 acres of mineral leases located in the Mojave Desert in San Bernardino county, California.

Standard Lithium is jointly listed on the TSX Venture and the NYSE American Exchanges under the trading symbol “SLI”; and on the Frankfurt Stock Exchange under the symbol “S5L”. Please visit the Company’s website at www.standardlithium.com.

On behalf of the Board of Standard Lithium Ltd.

Neither TSX Venture Exchange nor its Regulation Services Provider (as that term is defined in policies of the TSX Venture Exchange) accepts responsibility for the adequacy or accuracy of this release. This news release may contain certain “Forward-Looking Statements” within the meaning of the United States Private Securities Litigation Reform Act of 1995 and applicable Canadian securities laws. When used in this news release, the words “anticipate”, “believe”, “estimate”, “expect”, “target, “plan”, “forecast”, “may”, “schedule” and other similar words or expressions identify forward-looking statements or information. These forward-looking statements or information may relate to future prices of commodities, accuracy of mineral or resource exploration activity, reserves or resources, regulatory or government requirements or approvals, the reliability of third party information, continued access to mineral properties or infrastructure, fluctuations in the market for lithium and its derivatives, changes in exploration costs and government regulation in Canada and the United States, and other factors or information. Such statements represent the Company’s current views with respect to future events and are necessarily based upon a number of assumptions and estimates that, while considered reasonable by the Company, are inherently subject to significant business, economic, competitive, political and social risks, contingencies and uncertainties. Many factors, both known and unknown, could cause results, performance or achievements to be materially different from the results, performance or achievements that are or may be expressed or implied by such forward-looking statements. The Company does not intend, and does not assume any obligation, to update these forward-looking statements or information to reflect changes in assumptions or changes in circumstances or any other events affections such statements and information other than as required by applicable laws, rules and regulations. 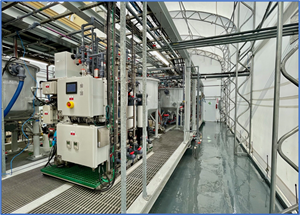 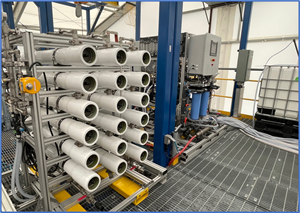 The osmotically-assisted High Pressure Reverse Osmosis (HPRO) plant installed on the third storey of the Company’s LiSTR DLE Plant. This unit acts as the link between the LiSTR DLE plant and the SiFT plant, and serves to concentrate the lithium chloride product so that it can be converted to lithium carbonate.